The Best of Bolivia 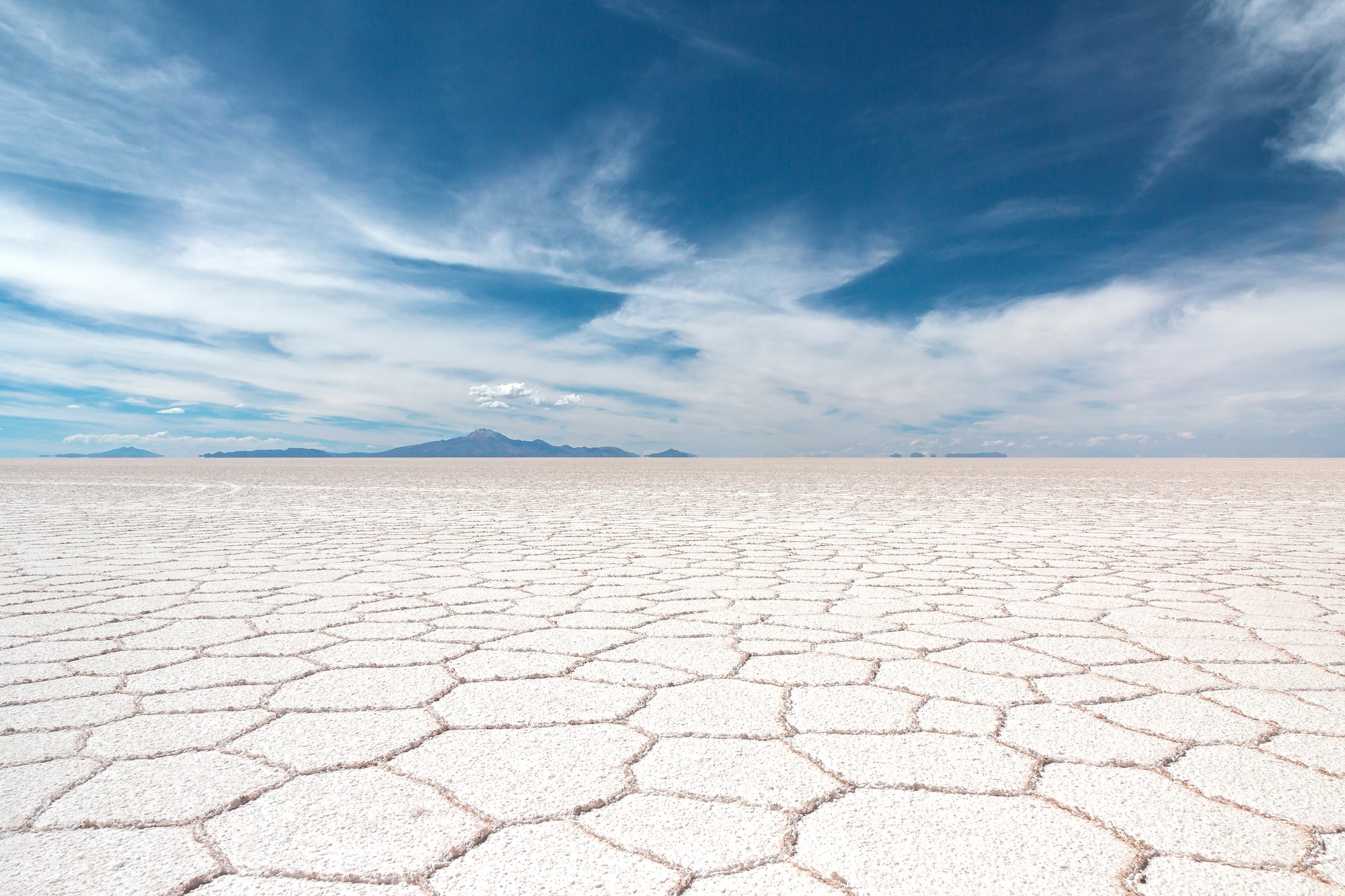 A rewarding country for the resilient, you’ll find extreme landscapes of remote jungle, soaring mountains, and moonlike plains, a stalwart and proud people, remarkably intricate weavings, and a warm welcome. This itinerary is designed to take you to the most iconic attractions in Bolivia. Jam packed from beginning to end and includes places such as Lake Titicaca, the Sun Island, La Paz City and Uyuni Salt Flats.

Upon arrival you are met and transferred to your hotel.

La Paz is a city with an interesting mix of modern and traditional. La Paz’ altitude of 12,000 feet will leave you breathless, but her lively market areas are worth wandering. To adjust to the altitude, you should rest a bit, and eat lightly this first day, avoiding alcohol and carbonated beverages.

Transfer to the airport. Morning flight from La Paz to Uyuni landing at the shores of the Uyuni salt flats.
At 10:00 am trip south through the highlands, passing the villages of San Cristobal, Culpina K until the rich and high valley of Alota (3 hours), then areas with great stone formations done by the erosion. Continue through high valleys until the village of Villamar (1 hour).

Early morning trip entering the REA (National Reserve Eduardo Abaroa) visiting Laguna Colorada (2 hours) where we have nesting of over 30,000 flamingos at 14,000 feet. Then up to geysers sol de Manana while passing alongside Challviri Lagoon with its hot spring and onto the shores of Polques. Cross through the high desert of Pampas de Dali with amazing views. We finally reach Laguna Verde (3 hours) in the foothills of Licancabur Mountain. Then trip back to Laguna Colorada, and enter the high desert of Sioli, visiting Arbol de Peidra and eventually reach Ojo de Perdiz (4 hours and 15,000 feet).

ONE DOUBLE & ONE SINGLE ROOM

Morning trip north through the minor lagoons and continue east reaching the valley of Alota (3 hours) . North through the highlands passing the villages of San Agustin and San Juan (2 hours) then entering Chuvica to the great Uyuni salt flat crossing to Isla Incahuasi (1 hour) . a special habitat of volcanic rocks and giant cacti. Continue east to Colchani (2 hours) where the locals produce salt. Enjoy a great sunset!

Today you are transferred by private vehicle to the airport in time for your flight to La Paz. You will be met at the airport and transferred to the lakeside town of Huatajata (1.5 hours). Lake Titicaca sits at 13,000 feet, the highest navigable lake in the world. The area is rich in agricultural products and provides a beautiful view of the Andes. The hotel offers an indoor/outdoor museum explaining the local culture of Bolivia as well as the art of reed raft making. Be sure to participate in the astronomy session held after dark.

You’ll be picked up at your hotel for the drive to Copacabana, (3.5 hours), a charming town on the shores of Lake Titicaca, where you will visit the church and view the famous black virgin. Then you take a boat cruise to Sun Island, (1 hour) until Huacani where you have an Atapi, a typical lunch in the highlands. Continue by boat to the ruins of Pikokania Inca Temple. Finally hike 1 hour uphill to La Estancia with a breathtaking view

Don’t miss an early sunrise! This morning, hike to the village of Yumani in the Garden of the Incas, to visit the Inca Stairs and to see the water spring of the Eternal Youth where the Incas were baptized. Continue down to the bay and take a boat to Moon Island (30 minutes) and the Inca ruins of Inak Uyu temple. We return to La Paz via Copacabana (3.5 hours) with private transportation.

Today you visit the important Pre-Columbian archaeological site of Tiahuanaco, located about 1 hour from La Paz. You’ll travel through the Bolivian Highlands, observing the Aymara way of life. Pass Laja, where the city of La Paz was founded in 1548, with its beautiful renaissance style church. Tiahuanaco is one of the oldest American cultures. Carbon14 dating indicates it dates back to between 1580BC and 1150 AD. It is considered the cradle of America, and one of the most advanced cultures of its time. One of the highlights will be the Gate of the Sun – probably an early astronomical observatory. Tiahuanaco was the center of a powerful, self-sustaining empire. Traditionally it is thought to have been built by the predecessors of the Inca Civilization over 2,000 years ago. It is a mysterious ruined city of extremely ancient origins. Some of the massive structures at this site, like the Great Pyramid and the Sphinx in Egypt and Baalbek in Lebanon, date from pre-flood times, as long ago as 10,500 BC.

You will also enjoy a La Paz City tour with your guide including the street markets, rich in handicrafts, weaving, and witchcraft artifacts. These are quite interesting and represent the traditional beliefs of the Ch’alla (ritual of offerings) and Pachamama (mother earth and the symbol of fertility). Visit the colonial part of the city, San Francisco Church, Murillo Square, and the outdoor replica of the Tiahuanaco temple. Then visit the modern part of the city to see how the city is growing, and how much the elevation drops. Visit the Valley of the Moon and its geological formations.

The journey begins in the wet and windy summit (15,400 feet) offering fantastic views of snow- covered peaks. From here it is a quick descent by a paved winding road passing between snowy mountains, grazing alpacas, llamas and an antidrug control station. There is a brief undulating section before entering the jungle – the most challenging portion of the trip; a narrow mountainside round with a a 3000 foot precipice and waterfalls on either side. (Due to new road construction in 2007 this route remains mostly empty). The ride will now become hotter and more dusty. When you reach bottom (Yolosa at 3600 feet), you will continue to Refugio Animal La Sendra Verde where lunch is served, a buffet of salads and pasta. You can relax poolside with cold refreshments and enjoy the view and see the rescued animals. Return to La Paz by car.

Included: Breakfast, bike equipment, lunch, snacks, a glass of beer and water.
Not included: Transfer to and from meeting point of bike tour and road tax. This will be done by local biking company.

Today you are transferred to the airport in time for your flight.

Set in a colonial-style building only 20 meters from San Francisco Square, La Casona Boutique Hotel offers rooms with free Wi-Fi, a restaurant, and a pleasant and convenient stay with Camacho Avenue located just 150 meters away. After 8 years of restoration, La Casona was declared by the local authorities as an architectural heritage site of the city of La Paz for its colonial architecture dating back to the 17th century. Decorated with parquet floors and gabled roofs, rooms at La Casona are fitted with fans, air conditioning and heating. All have private balconies overlooking the city. A buffet breakfast is served daily. Free visits to El Tapado Museum can be organized. Massage can be requested, and bikes can be rented to explore the city. La Casona Hotel Boutique is also just 15 km from El Alto International Airport.

Located in one of the most impressive places of the famous "lagoon route" in southern Bolivia and nestled in a huge natural rock, our hotel-shelter is an architectural hybrid in which living nature is a fundamental part of the experience. . A space full of mystical meanings that generously offers shelter for the mind, rest for the body and shelter for the heart.

Mallku Cueva is a space conceptualized to coexist with nature and its inexorable presence. In it, you will have all the necessary comforts for a satisfactory stay, oriented not only to take care of you but to provide a comfortable space in which you can, happily, connect with the experiences of your trip from the endearing simplicity of a comfortable and opportune accommodation in the middle of nowhere.

In harmony with this Andean landscape, the Tayka del Desierto Hotel opens its doors to welcome visitors from all over the world, offering the opportunity to visit one of the most beautiful places in South America, the Eduardo Avaroa Flora and Fauna Reserve, where there are the wonderful Lagunas de Colores, the Sun Geysers of Tomorrow and the Stone Tree. In its construction, volcanic stones carved for the walls were used and an architectural design specially designed to tolerate the intensity of the desert climate. Solar energy is used and there is also a heating system based on radiators that circulate hot water and emit heat. The hotel also offers food service in the restaurant, from where our passengers can enjoy a wonderful view of the majestic Siloli Desert.

On the shores of the majestic Salar de Uyuni -under an astonishing sky full of magnificent colours and stars- stands, bursting with historical significance, the Palacio de Sal (The Salt Palace). A haven of magical moments where every end of the day is the evidence of an irrefutable fact: no dream, however extraordinary it may seem, is ever diluted before it comes true.

The Inca Utama Hotel & Spa is located on the shores of the majestic Lake Titicaca, near Huatajata. A daily breakfast is included and there is free Wi-Fi in public areas. The rooms at Inca Utama have heating, a private bathroom with free toiletries and lovely views of the lake. Bed linen and towels are included. The hotel has several first-class facilities, such as a gym, a restaurant and a large museum, observatory and cultural complex. In addition, guests will find llamas, alpacas and birds in the gardens. The property has meeting facilities, a shared lounge and luggage storage. The Inca Utama is located an hour and a half by car from the center of La Paz, 86 km from the road that leads to the city of Copacabana. 63 km from El Alto International Airport.

Existing in perfect harmony with the rhythms of Lake Titicaca, as well as the culture and heritage of the local Aymaras, Ecolodge ‘La Estancia’ is a spiritual getaway at one with nature. ?Located on Isla del Sol, amongst the best and most beautiful places to visit in Bolivia, the Ecolodge offers a breathtaking setting unlike any other with majestic views of the Lake and the Royal Andes Mountains. With only 15 cottage homes built into restored agricultural terraces (tacanas), the intimate design allows for a full immersion into the natural beauty of Bolivia. All the cottages are built from local, responsibly harvested wood, stone, adobe and straw. A unique solar room is constructed near each room to use passive solar energy to heat the sleeping area. Also, solar panels are utilized to warm water for your environmental convenience. All rooms also offer exceptional views of Lake Titicaca and the Andes Range.

Since 1993 Maxim Tours’ passion for exotic destinations has made us a highly sought after Boutique Tour Operator for discerning travelers. After three decades we continue to exceed our clients' expectations. Our approach over these many years is simple; offer the very best service and travel experience at the most competitive prices while balancing the importance of sustainable tourism with a high quality travel product.

Maxim Tours' guides have a reputation for being the best in the business. Experts in their fields, friendly and interesting,  a good guide will bring the most out of every excursion while creating lifelong memories.

At no time during your adventure will you be alone. Our local partners are available 24/7 in the event you need any assistance while traveling. We will monitor your progress and take care of any unexpected developments so that your trip continues unhindered.

Responsible and sustainable tourism should be more than just a phrase - it has to be an ongoing and tangible commitment to balancing tourism with the upliftment of local communities and preservation of the natural environment. Maxim Tours actively supports camps and lodges whose business models reflect this commitment.